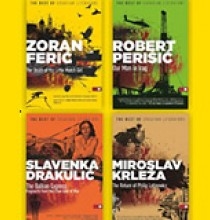 Croatian publishing house VBZ has started a brand new project called Croatian Writers in Translation. Its aim is to offer tourists visiting the country and foreigners living in Croatia a different cultural dimension – the works of great Croatian writers translated into English and other languages.

“Visitors to Croatia must be interested to experience the country through the eyes and words of Croatian writers. Besides the works of  Slavenka Drakulic and  Dubravka Ugresic there isn’t much they can enjoy in their own languages”, the publishers at VBZ concluded. With the new project they have decided to fill this gap and to simultaneously promote Croatian literature and Croatian writers outside their own territory.

VBZ plans to publish a new series annualy within their library - The best of Croatian literature - and offer interested visitors the possibility to enjoy both Croatian classics, such as Krleza, Andric and Marinkovic, and the more popular contemporary Croatian writers in English. Besides translated literature, VBZ has also scheduled non-fictional works for their new library.

The first series is consist of the following books:

Additional to these four belletristic titles, VBZ has scheduled a bilingual English/Italian edition of the culinary book "Island on a Plate" / "An island on the plate / L 'isola sul piatto", containing recipes from the Isle of Vis, and a new German edition of the cult novel “Zagrepcanka” (Zagreb Girl) by Branislav Glumac.